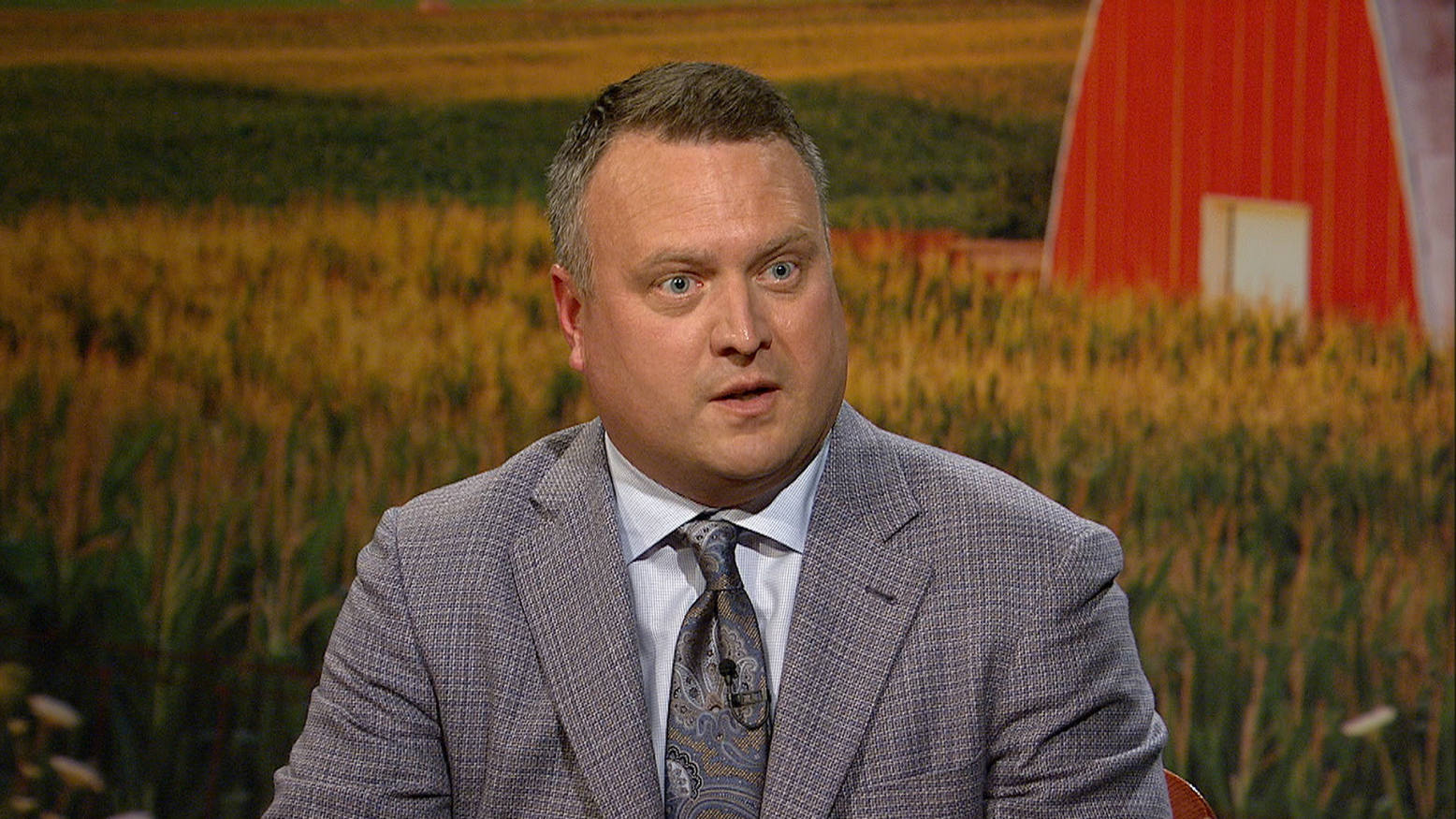 Global events and actions had a mixed impact on the trade. For the week, the nearby wheat contract lost 31 cents, while May corn added 3 cents. Chinese buying carried the most weight in the soy complex.  The May soybean contract gained 34 cents. May meal dropped by $2.60 per ton. July cotton fell $4.86 per hundredweight. Over in the dairy parlor, May Class III milk futures shed 77 cents. The livestock sector was up. June cattle expanded $2. May feeders increased $2.10. And the June lean hog contract added 30 cents. In the currency markets, the U.S. Dollar index rallied 84 ticks. June crude oil declined $4.48 per barrel. COMEX Gold fell $38.90 per ounce. And the Goldman Sachs Commodity Index shed more than 16 points to finish at 748.10.

Yeager: Joining us now to provide some insight is Jeff French. Jeff, good to have you back.

French: Great to be here, Paul.

Yeager: This wheat thing, you saw in the stories we talked to a couple of corn farmers and then a North Dakota producer, the wheat has been elusive for moisture and to get into the ground. Have we switched -- and then this Russia news of they're going to start exporting again -- are those two the biggest drivers in the direction we're going with wheat right now?

French: Oh absolutely. It's the export market of the Russia story out here this week that they exported 30 million metric tons and they're saying that they could export this year up to 40 million metric tons, which is a huge amount. We'll see if they are able to skirt those sanctions. I think they'll do everything --

Yeager: A lot of unknown destinations or origins of these tankers, right?

French: Yeah, black market type deals. And then the crop ratings, they went down this week. I would have liked to have seen the wheat perform better. It was an outside down weekly close, technically pretty negative. And you look at those new crop prices hovering right around $12. We tried multiple times to get through that and we weren't able to and it sold off here. Looking at the conditions it's hard to be a seller here with how many bushels am I actually going to produce. So I would go on paper here, get some futures sold or get some puts bought, because the wheat looks like it's got lower prices coming.

Yeager: And add in one more wrinkle with the Russians, this whole we're tying the ruble to gold and they're trying to change some of the, they're trying to get around sanctions themselves. Is that at play in any of this global story?

French: Oh absolutely because the global demand is going to be there and I don't see that going away here in the next 12 to 18 months. So the wheat will finds its way to the willing buyers and there will be countries that will be willing to buy the Russian wheat.

Yeager: We had a holiday over the weekend, Easter. We're looking at another holiday, Mother's Day, before we get too excited about corn planting. Let's start with old crop and then we'll get to the Mother's Day anecdote. Do you believe that the rally, that's the big question, is it done in corn in that old crop for now?

French: I think we need to see maybe another week. We have $8 corn this week. We had five days of $8 corn. Since the Board of Trade has been around since 1848 there has been 37 days with corn above $8 a bushel, five of those days were this week. So we are in rare times, rare prices here. If you have some bushels left to sell, take advantage of it. These are phenomenal prices.

Yeager: Do you think people really do have corn left?

French: Yeah I do, I do. I think they do. And you see that in the basis. Some of the basis has weakened up here on this rally. But yeah, I've talked to producers that have old crop corn left right now.

Yeager: Well, let's just do it now. We're going to switch things up a little bit. Tim in Houston, Minnesota actually has a question about basis. He's asking us on Twitter, what are your thoughts on basis, both old and new crops? Let's just stick with corn.

French: Old crop historically very tight here right now. Many places throughout the country are positive basis. Again, it has weakened up here a little bit on this rally but I have no problem locking in the old crop. New crop, you'll have to look at your local area. You know that better than anybody. But historically basis, if you look at the last five years, it's very strong still.

Yeager: You mentioned the new crop, I mentioned Mother's Day. Are you in that camp of I'm not too worried about spring planting progress until Mother's Day?

French: I look at it from a national standpoint. I think you get to -- you look at the last 10 years and by May 8th nationally if we don't have 50% of the corn planted then we are delayed. Does that bring down the bushels in the final yield? We'll have to see what the summer entails weather wise. But I look at that May 8th, we've got to get it in 50% in the ground by then on the corn.

Yeager: Do you put in volatility as the most in play in those next two weeks for new crop?

French: The Monday crop progress reports here in the next three to four weeks are going to be very closely watched. And that Monday night grain trade is going to be volatile. It's volatile already, with prices like this you are going to have big price moves and we've seen that here recently. But volatility is going to be here to stay here for a while in the grain markets.

Yeager: In beans, beans were kind of opposite corn and wheat until today. What changed?

French: Well, the big story here recently has been about the edible oils and it has been about the bean oil rally. And it rallied this week to new all-time high prices, 83, 84 cents a pound. And then overnight, Indonesia came out and says, well we are banning exports on their palm oil. Well, Indonesia is the biggest exporter of edible oils in the world. And then you have the problems going in Ukraine with sun seed. Ukraine sells a ton of sun oil on the world export market. So you're taking about 20% of the world exporters out of the market. So you have this market go straight up, it rallied the beans with it, but Friday's close in the beans was not good at all.

Yeager: The resistance was there at $16, it just couldn't get -- so is this a technical move too?

French: It could have been profit taking. We rallied this thing here in the last three weeks about $1.70 a bushel. I didn't like the fact that it didn't take out the contract highs. We got within five, six, seven cents and then we failed. Was it profit taking? We'll have to see next week. But definitely not a good way to close out Friday. If we have weakness next week I think these beans are coming under pressure here. You look at it, they're $15 beans, 92 million acres going to go in the ground with normal growing conditions, I know that's a big if, we'll have to see what happens, but $15 off the combine sounds very good to me.

Yeager: What percentage should maybe somebody think about selling?

Yeager: Let's move to the livestock. We had a cattle on feed report today. If you're playing darts, I don't think you want to look where your dart landed?

French: No, it was a big miss. The one that stands out is the placements came in at 100% of last year. The analysts thought it was going to be down at 92%. And actually a lot of the range was below that down at 87%. So a big miss on there. Also the on-feed numbers, 2% higher than last year. We thought we were going to get to an area where we start to work through these animals. But we're going to have some numbers to deal with here through August. We've got that August in that $140, $142 area. These cattle need to be protected here.

Yeager: Well, after the last cattle on feed report we had a major rally in feeders if I remember correctly. Do you expect that action to take place on Monday?

Yeager: You're concerned about the slaughter pace in the live cattle?

French: No, slaughter numbers are good. We're staying current, especially with more number of cattle on feed. Also you look at cow slaughter. Cow slaughter is running drastically above last year levels and we are on pace to cull seven million cows, that's the most since 1996. So this herd is getting smaller and that is going to continue here. And fundamentally it's going to be bullish longer term, but right now we have some numbers to work through.

Yeager: All right. In the hog market it looked like maybe some bottom feeders were coming in early in the week. We only finished the week up a couple of cents. Does that signal something to you?

French: As of right now it would be the hog market.

Yeager: All right. Before we close I need to ask you about crude. Last week we fought off right there at $100 right before. This week we finished off 4% but still above $100. What does that mean?

French: It's been choppy for a month straight. We talked crude here with a couple of clients today. I'll sell crude below $97 and I'll buy it above $113. Really we haven't done much in the last six weeks in the crude market.

Yeager: You don't see any of the expansion that is maybe coming on in Texas or what they continue to produce in North Dakota or any other of these patches that are coming back online as significant?

French: Not in the next 60 to 90 days. I think maybe after that. But right now for today's spot market I don't think that has a bearing right now.

Yeager: Natural gas was off, fertilizer, we're losing some here, are we?

French: Yeah, the natural gas it traded up to a 10 year high this week right above $8 a therm, then broke hard. Again, we'll have to see. The fertilizer thing is not going away.

Yeager: How about we talk about that in Market Plus? I won't hang you out next time in Plus, we have more time. Thanks, Jeff.

Yeager: That will do it for the installment of Market to Market. We're going to keep going in Market Plus. As I just mentioned we'll talk about natural gas and your questions. You can find that free on our website of MarketToMarket.org. Now, Facebook may feature some strong opinions, but we do try to bring solid content with pictures and stories from our work that we do here. Follow our efforts at MarketToMarketShow. Next week, we look at the roller coaster ride for dry beans and other pulse crops. Thank you for watching. Have a great week.

Trading in futures and options involves substantial risk. No warranty is given or implied by Iowa PBS or the analysts who appear on Market to Market. Past performance is not necessarily indicative of future results.

Market to Market is a production of Iowa PBS which is solely responsible for its content.